Linear vs. Logistic Probability Models: Which is Better, and When?

In his April 1 post, Paul Allison pointed out several attractive properties of the logistic regression model.  But he neglected to consider the merits of an older and simpler approach: just doing linear regression with a 1-0 dependent variable.  In both the social and health sciences, students are almost universally taught that when the outcome variable in a regression is dichotomous, they should use logistic instead of linear regression. Yet economists, though certainly aware of logistic regression, often use a linear model to model dichotomous outcomes.

Let’s start by comparing the two models explicitly. If the outcome Y is a dichotomy with values 1 and 0, define p = E(Y|X), which is just the probability that Y is 1, given some value of the regressors X. Then the linear and logistic probability models are:

The major advantage of the linear model is its interpretability. In the linear model, if a1 is (say) .05, that means that a one-unit increase in X1 is associated with a 5 percentage point increase in the probability that Y is 1. Just about everyone has some understanding of what it would mean to increase by 5 percentage points their probability of, say, voting, or dying, or becoming obese.

How intuitive are odds ratios?

Odds ratios seem like they should be intuitive. If d1 = 2, for example, that means that a one-unit increase in X1 doubles the odds that Y is 1. That sounds like something we should understand.

But we don’t understand, really. We think we understand odds because in everyday speech we use the word “odds” in a vague and informal way. Journalists commonly use “odds” interchangeably with a variety of other words, such as “chance,” “risk,” “probability,” and “likelihood”—and academics are often just as sloppy when interpreting results. But in statistics these words aren’t synonyms. The word odds has a very specific meaning—p/(1-p)—and so does the odds ratio.

Still think you have an intuition for odds ratios? Let me ask you a question. Suppose a get-out-the-vote campaign can double your odds of voting. If your probability of voting was 40% before the campaign, what is it after? 80%? No, it’s 57%.

If you got that wrong, don’t feel bad. You’ve got a lot of company. And if you got it right, I bet you had to do some mental arithmetic[1], or even use a calculator, before answering. The need for arithmetic should tell you that odds ratios aren’t intuitive.

Here’s a table that shows what doubling the odds does to various initial probabilities:

That’s why I’m not crazy about odds ratios.

How nonlinear is the logistic model? 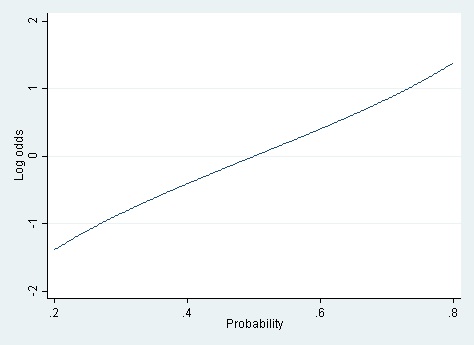 It’s only when you have a really wide range of probabilities—say .01 to .99—that the linear approximation totally breaks down. 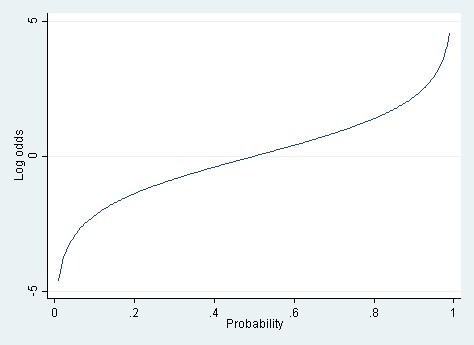 A rule of thumb

These considerations suggest a rule of thumb. If the probabilities that you’re modeling are extreme—close to 0 or 1—then you probably have to use logistic regression. But if the probabilities are more moderate—say between .20 and .80, or a little beyond—then the linear and logistic models fit about equally well, and the linear model should be favored for its ease of interpretation.

Both situations occur with some frequency. If you’re modeling the probability of voting, or of being overweight, then nearly all the modeled probabilities will be between .20 and .80, and a linear probability model should fit nicely and offer a straightforward interpretation. On the other hand, if you’re modeling the probability that a bank transaction is fraudulent—as I used to do—then the modeled probabilities typically range between .000001 and .20. In that situation, the linear model just isn’t viable, and you have to use a logistic model or another nonlinear model (such as a neural net).

Keep in mind that the logistic model has problems of its own when probabilities get extreme. The log odds ln[p/(1-p)] are undefined when p is equal to 0 or 1. When p gets close to 0 or 1 logistic regression can suffer from complete separation, quasi-complete separation, and rare events bias (King & Zeng, 2001). These problems are less likely to occur in large samples, but they occur frequently in small ones. Users should be aware of available remedies. See Paul Allison’s post on this topic.

Interpretability is not the only advantage of the linear probability model. Another advantage is computing speed. Fitting a logistic model is inherently slower because the model is fit by an iterative process of maximum likelihood. The slowness of logistic regression isn’t noticeable if you are fitting a simple model to a small or moderate-sized dataset. But if you are fitting a very complicated model or a very large data set, logistic regression can be frustratingly slow.[2]

Paul von Hippel is an Associate Professor in the LBJ School of Public Affairs at the University of Texas, Austin, with affiliations and courtesy appointments in Sociology, Population Research, and Statistics and Data Science.

[2] In current work, my colleagues and I are using a hierarchical, spatially correlated model to estimate the probability of obesity among 376,576 adults in approximately 2,400 US counties. The computational methods are demanding, and switching from a logistic to a linear probability model reduced our runtime from days to less than an hour.