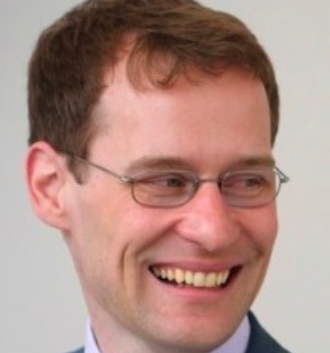 This seminar offers an applied introduction to directed acyclic graphs (DAGs) for causal inference. DAGs are a powerful new tool for understanding and resolving causal issues in empirical research. DAGs are useful for social and biomedical researchers, and for business and policy analysts who want to draw causal inferences from non-experimental data. A major attraction of DAGs is that they are “algebra-free,” relying instead on intuitive yet rigorous graphical rules.

Starting February 10, we are offering this seminar as a 3-day synchronous*, livestream workshop. Each day will consist of a 4-hour live lecture held via the free video-conferencing software Zoom. You are encouraged to join the lecture live, but will have the opportunity to view the recorded session later in the day if you are unable to attend at the scheduled time.

Each day will include a hands-on exercise to be completed on your own after the lecture session is over. An additional lab session will be held Friday and Saturday afternoons, where you can review the exercise results with the instructor and ask any questions.

*We understand that scheduling is difficult during this unpredictable time. If you prefer, you may take all or part of the course asynchronously. The video recordings will be made available within 24 hours of each session and will be accessible for four weeks after the seminar, meaning that you will get all of the class content and discussions even if you cannot participate synchronously.

The two primary uses of DAGs are (1) determining when causal effects can be identified from observed data, and (2) deriving the testable implications of a causal model. DAGs are also helpful for understanding the causal assumptions behind widely used estimation strategies, such as regression, matching, and instrumental variables analysis.

To provide a flavor for what we will cover in this class, consider the following DAG:

This is a stylized causal model relating an early health variable, income, smoking, cancer, and death. DAGs help us to see which inferences we can make and which inferences we cannot make. For example, if this model describes the true data generating process and if traumatic brain injury is unmeasured, then it would be possible to identify the causal effect of income on smoking but NOT the causal effect of income on death.

DAGs can also help us avoid common errors in interpretation by allowing us to derive associations between variables from a causal model. The graph below illustrates Berkson’s bias, a famous example of selection bias. 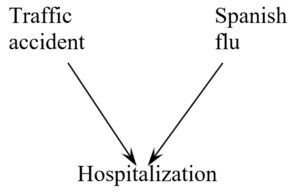 If both traffic accidents and the flu land people in the hospital, then a study of hospital records would show that accidents are negatively associated with having the flu. Does that mean that having the flu makes me a better driver? Or that getting in an accident is as good as a flu shot? Obviously not! But we will learn why researchers make these kind of errors regularly, how to avoid them, and what to do about them to make correct inferences.

This seminar will empower participants to recognize and understand problems and to spot fresh opportunities for causal inference in their own data. This is a hands–on course with carefully structured and supervised exercises. Many of these exercises will use the freeware package DAGitty which allows users to draw and analyze causal graphs. See the computing section below for more details.

For background and preparation, we recommend reading:

To fully participate in the course, participants will need their own computer. Demonstrations and exercises will make use of the freeware package DAGitty, which is available at daggity.net. We will use DAGitty in its web browser mode. However, it can also be downloaded for offline use and is available as a package for R.

If you want to understand under what circumstances you can draw causal inferences from non-experimental data, this course is for you. Participants should have a good working knowledge of multiple regression. Some prior exposure to causal inference (counterfactuals, propensity scores, instrumental variables analysis) will be helpful but is not essential.

a. Elements
b. Graphical display of the data generating model
c. The importance of causal assumptions

3. Associational implications of a causal model

a. Association vs. causation in DAGs
b. Three sources of association and independence (d-separation)
c. Deriving testable implications

a. Lots and lots of progressively harder real examples
b. Why selection and confounding are distinct causal concepts

a. Identification in matching and regression
b. Making sense of regression coefficients

a. “Controlled” and “natural” effects
b. Identification criteria

The fee of $895 USD includes all course materials.

“I love everything about the course, and enjoyed every minute of the lectures..."

“This class is very interactive with many thought-provoking examples..."

“This class is very interactive with many thought-provoking examples sampled from diverse disciplines. Participants asked terrific questions. The material presented is important and timely. I came away with a number of insights I will now apply to my own research. A number of us have exchanged contact information and will follow each other’s progress on this topic.”

“The speaker was very knowledgeable and was able to present concepts in an easy to digest manner..."

“The speaker was very knowledgeable and was able to present concepts in an easy to digest manner, utilizing a set of demonstrative real-life examples. The availability of the class notes beforehand and the Zoom recordings following each session was very helpful, particularly as I was not able to attend the sessions in real-time.”

“I appreciated the opportunity to interact with Felix..."

“I appreciated the opportunity to interact with Felix, ask questions and pose problems. I also appreciated the ability to attend lectures asynchronously, which I did have to take advantage of on one day.”

“Highly informative, well balanced in terms of the theory..."

“Highly informative, well balanced in terms of the theory and applied aspects of developing non-parametric causal DAGs and causal inference. Very well taught by an expert who is humble, approachable and very passionate about their field.”

“This course is rigorous but very applied..."

“This course is rigorous but very applied. I had already read about this topic but the examples really communicated how to use DAGs.”

“Felix is an outstanding instructor...”

“Felix is an outstanding instructor with tremendous expertise.”

“Dr. Elwert’s knowledge on the topic was broad, in depth, and very insightful..."

“Dr. Elwert’s knowledge on the topic was broad, in depth, and very insightful. The numerous examples and interactive format was very helpful in understanding the topic.”