How many imputations do you need?

There are limits, though. No matter how many imputations you use, multiple imputation estimates can never be more precise or replicable than maximum likelihood estimates. And beyond a certain number of imputations, any improvement in precision and replicability becomes negligible.

In a recent paper (von Hippel 2018), for example, I estimated the mean body mass index (BMI) of first graders, from a sample where three quarters of BMI measurements were missing. With 5 imputations, the point estimate was 16.642 the first time I imputed the data, and 16.659 the second time. That’s good replicability; despite three quarters of the values being imputed, the two point estimates differed by just 0.1%.

So you often need more imputations to get replicable SE estimates. But how many more? Read on.

I recently published a new formula (von Hippel 2018) that estimates how many imputations M you need for replicable SE estimates. The number of imputations is approximately

This formula depends on two quantities, FMI and CV(SE).

For example, if you have FMI=30 percent missing information, and you would accept the SE estimate changing by 10 percent if you imputed the data again, then you’ll only need M=5 or 6 imputations. But if you’d only accept the SE changing by 5%, then you’ll need M=19 imputations. (Naturally, the same formulas work if FMI and CV(SE) are expressed as proportions, .3 and .1, rather than percentages of 30 and 10.)

Here’s a graph, adapted from von Hippel (2018), that fits the linear and quadratic rules to a simulation carried out by Bodner (2008), showing how many imputations are needed to achieve a goal similar to CV(SE)=.05. With that goal, the quadratic rule simplifies to M=1+200 FMI2, and the linear rule, as usual, is M=100 FMI. 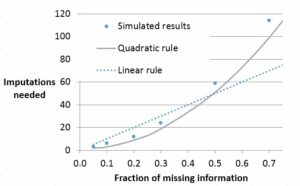 When the fraction of missing information gets above 70%, both rules underestimate the number of imputations needed for stable t-based confidence intervals. I suspect that happens because the degrees of freedom in the t statistic becomes unstable (von Hippel 2018). I am looking at that issue separately.

A limitation of the quadratic rule is that FMI is not known in advance. FMI has to be estimated, typically by multiple imputation. And the estimate of FMI itself can be unreliable unless the number of imputations is large (Harel 2007).

There are two small wrinkles:

First, when you plug an estimate of FMI into the formula, you shouldn’t use a point estimate. Instead, you should use the upper bound of a 95% confidence interval for FMI. That way you take only a 2.5% risk of having too few imputations in your final analysis.

Second, in your analysis you may estimate several parameters, as in a multiple regression. In that case, you have to decide which SEs you want to be replicable. If you don’t have a strong opinion, the simplest thing is to focus on the SE of the parameter with the largest FMI.

The two-step recipe has been implemented in three popular data analysis packages.

The two-stage procedure isn’t the only good way to find a suitable number of imputations. An alternative is to keep adding imputed datasets until the estimates converge, or change very little as new imputed datasets are added. This approach can be applied to any quantity you want to estimate—a point estimate, a standard error, a confidence interval, a p value. This approach, called iterative multiple imputation (Nassiri et al. 2018), has been implemented in the R package imi, which is available via GitHub, here.

Stata’s mi estimate command uses a jackknife procedure to estimate how much your standard error estimates and p values would change if the data were imputed again with the same number of imputations (Royston, Carlin, and White 2009). These jackknife estimates can give you some idea whether you need more imputations, but they can’t directly tell you how many imputations to add.

(An earlier, shorter version of this post appeared on missingdata.org in January 2018)

von Hippel, Paul T. (2018). “How many imputations do you need? A two-stage calculation using a quadratic rule.” Sociological Methods and Research, published online, behind a paywall. A free pre-publication version is available as an arXiv e-print.