In two earlier posts on this blog (here and here), my colleague Paul von Hippel made a strong case for using OLS linear regression instead of logistic regression for binary dependent variables. When you do that, you are implicitly estimating what’s known as a linear probability model (LPM), which says that the probability of some event is a linear function of a set of predictors.

Although I agreed with all of von Hippel’s points, I responded with two more blog posts (here and here) in which I gave several reasons why logistic regression was still preferable to the LPM. One of them was that LPMs frequently yield predicted probabilities that are greater than 1 or less than 0, and that obviously can’t be right.

For applications that focus on the regression coefficients, out-of-bounds predictions may not be a big problem. But in many other settings, valid predicted probabilities are essential. These include inverse probability weighting, propensity score methods, and expected loss calculations. Many authors have pointed to invalid predicted probabilities as the principal disadvantage of LPMs (e.g., Westin 1973, Long 1997, Hellevik 2007, Wooldridge 2010, Greene 2017).

Well, I’m happy to tell you that there’s an easy and effective fix for that problem. And it’s been right under our noses ever since Fisher (1936) identified the key elements of a solution. Here’s a quick summary of how the method works:

In the remainder of this post, I’ll flesh out the details and then give two examples.

What is the linear discriminant model?

The linear discriminant model was first proposed by Fisher as a method for classifying units into one or the other of two categories, based on a linear function of the predictor variables. Let x be the vector of predictors, and let y have values of 1 or 0. The LDM assumes that, within each category of y, x has a multivariate normal distribution, with different mean vectors for each category, u1 and u0, but a covariance matrix S that is the same for both categories.

That’s it. That’s the entire model. There are two remarkable facts about this model:

Fact 1. The model specifies the conditional distribution x given the value of y. However, using Bayes’ theorem, it can be re-expressed to give the conditional probability of each value of y, given a value of x. What’s remarkable is that this yields a logistic regression model. Specifically,

where a and b are functions of the two mean vectors and the covariance matrix.

Fact 2. The other remarkable fact is that maximum likelihood estimates of a and b can be obtained (indirectly) by ordinary least squares regression of y on x. This was originally noted by Fisher but put into more usable form by Haggstrom (1983). To estimate b, the OLS slope coefficients must each be multiplied by K = N / RSS where N is the sample size and RSS is the residual sum of squares. K is typically substantially larger than 1.

The intercept a is obtained as follows. Let m be the sample mean of y and let c be the intercept in the OLS regression. Then, the ML estimate of a is

These two facts suggest the following procedure for getting predicted probabilities from a linear probability model.

I call this the LDM method. To make it easy, I have written software tools for three different statistical packages. All tools are named predict_ldm:

The LDM method will absolutely give you predicted probabilities that are always within the (0,1) interval. Aside from that, are they any good? In a moment, I’ll present two examples that suggest that they are very good indeed. However, a major reason for concern is that the LDM assumes multivariate normality of the predictors, but there are very few applications in which all the predictors will meet that assumption, or even come close.

Several studies have suggested that the LDM is pretty robust to violations of the multivariate normality assumption (Press and Wilson 1978, Wilensky and Rossiter 1978, Chatla and Shmueli 2017), but none of those investigations was very systematic. Moreover, they focused on coefficients and test statistics, not on predicted probabilities.

I have applied the method to many data sets, and all but two have shown excellent performance of the LDM method. How did I evaluate the method? I first fit the linear model and applied the LDM method to get predicted probabilities. Then I fit a logistic model using the standard iterative ML method, which makes no assumptions about the distribution of predictors. I then compared the predicted probabilities from LDM and conventional logistic regression in several ways.

I figured that conventional logit should be the gold standard. We can’t expect the LDM method to do any better than conventional logit because both rely on the same underlying model for y, except that LDM makes additional assumptions about the predictor variables.

For this example, I used a well-known data set on labor force participation of 753 married women (Mroz 1987). The binary dependent variable has a value of 1 if the woman was currently in the labor force (478 women), otherwise 0. Independent variables are number of children under the age of six, age, education (in years), and years of labor force experience, as well as the square of experience. In the Appendices, you’ll find code for this example (and the next) using Stata, SAS and R. The output shown here was produced by Stata.

Next we’ll look at the correlations among the three sets of predicted values: 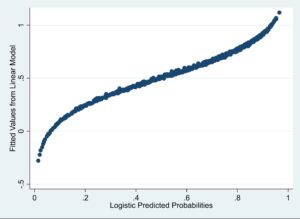 By contrast, the plot below for LDM vs. logistic is very well calibrated. 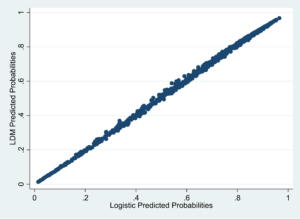 After deleting cases with missing data, there were 1,029 patients in the data set. Death is the dependent variable, and 764 of the patients died. What’s different about this example is that all the predictors are categorical and, therefore, have a joint distribution that is nothing like a multivariate normal. The predictors are surgery (1 or 0), a randomized treatment (1 or 0), hospital (Mayo Clinic, Johns Hopkins, or Sloan Kettering), and cancer stage at diagnosis (1, 2, or 3). Both of the 3-category variables are represented by two dummy (indicator) variables. The fitted models included main effects of these variables but no interactions.

Again, I ran two regressions, one linear and one logistic. The linear predictions were transformed by the LDM method. As the next table shows, there were definitely cases with linear predicted values greater than 1. In fact, there were 96 such cases.

Here are the correlations among the three versions of the predicted values.

Again, the LDM predictions do a better job than the linear predictions of matching the conventional logistic predictions.

The LDM method is a simple and effective way to transform predicted values from a linear probability model so that they do not fall outside the (0,1) interval. Although the method relies on strong assumptions about the distribution of the predictor variables, it nevertheless performed very well in 13 out of 15 data sets and models that I have examined, none of which had predictors that came close to multivariate normality.

What about the two exceptions? Well, I’m still studying them to get a better understanding of what went wrong, but I can tell you this: In one of them, the model included a 2-way interaction that was highly significant in the linear model but not significant in the conventional logistic model. In the other, there were two predictors that were highly collinear. I am also designing a simulation study to explore the conditions under which the LDM method does or does not work well.

Is this a perfect method? Certainly not. I still prefer to use conventional logistic regression wherever computationally practical. But even with today’s enormous computing power, there are still many applications where linear models are quite attractive. And if you’re going to use an LPM and you want valid predicted probabilities, the LDM method seems like a pretty good way to get them.

Chatla, S. B., & Shmueli, G. (2017). An extensive examination of regression models with a binary outcome variable. Journal of the Association for Information Systems, 18(4), 1.

Hellevik, Ottar (2009): Linear versus logistic regression when the dependent variable is a dichotomy. Quality & Quantity 43.1 59-74.

Mroz, T.A. (1987) “The sensitivity of an empirical model of married women’s hours of work to economic and statistical assumptions.” Econometrica 55: 765-799.

Appendix 1: Stata code for the examples

Note: This program uses the predict_ldm command, which may be downloaded here.

Appendix 2:  SAS code for the examples

Note: This program uses the predict_ldm macro, which can be downloaded here. The data sets may be dowloaded here and here.

Appendix 3:  R code for the examples